A Special Note about the 2015 We Are Boston Anniversary Gala:

2015 We are Boston Anniversary Gala an unprecedented success!

Photo:  https://goo.gl/xjKhUk
On behalf of the Mayor’s Office of New Bostonians, the Gala Co-Chairs Bob Reynolds and Jim Rooney, and the Anniversary 10 Host Committee, we would like to thank all the guests and sponsors of this year’s event. Over 1,000 people came out on Tuesday evening to celebrate new Bostonians’ contributions and rich cultures, enjoyed a star-studded performance by Academy Award-winning and multi Grammy-nominated Vanessa Williams, and to honor our five awardees: Junot Diaz (Leadership), Chef Ming Tsai (Leadership), Walgreens (Community Champion), Frangeli Ramirez (Youth Action) and Justin Nguyen Phuoc (Youth Action). Special thanks to our LIVE auction donors, auctioneer John Terrio, our inspiring speakers, Amit Dixit and Valeria Do Vale, our fabulous host, Janet Wu of WHDH Channel 7 and to our performers – 3 Sudacas, Angel Dance Company, master illusionist Darren Young, Ilana Katz Katz, Marcus Santos and Afro Brazil, Naty Hernandez, O’Shea Chaplin Academy of Irish Dance, Salsa Y Control Dance Company, Sociedad Latina Youth Band, Veronica Robles and her Mariachi, Wax and Gold, and YOFES Musical. Hats off to our volunteers for their time and commitment!
Thank you to everyone for all you do in making sure that New Bostonians are an integral part of this city’s social, civic and economic fabric!Robert L. Reynolds, James E. Rooney, The Anniversary 10 Committee & The New Bostonians Team
All the best,
Alejandra St. Guillen
Herald Articles:
Vanessa Williams totes talent to Mayor’s gala
http://goo.gl/E8pCUo
Q+A with Vanessa Williams:
http://www.bostonherald.com/topic/erica_corsano
YOUTH ACTION AWARD NOMINATION
2015 We Are Boston Anniversary Gala

Mayor Martin J. Walsh and his Office of New Bostonians seek to honor outstanding youth leaders who have made invaluable contributions in promoting and embracing Boston’s rich diversity and facilitating New Bostonians’ full participation in the life of the City of Boston. Please review the criteria below and nominate candidates for the 2015 We Are Boston Youth Action Award.The Youth Action Award is intended for a Boston resident, under 21 years of age who is or whose parents are immigrants. 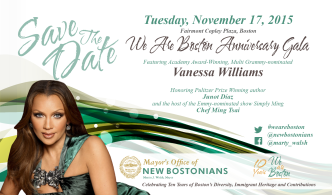 A Special Note about We Are Boston Anniversary Gala

On behalf of Mayor Martin J. Walsh and the Office of New Bostonians (MONB), we invite you to join us for the We are Boston 10th Anniversary Gala, celebrating our city’s diversity, immigrant heritage and contributions.  The Anniversary Gala featuring Academy Award-Winning, multi-Grammy nominated, Vanessa Williams will be held on Tuesday, November 17, 2015 at 6:00 p.m. at the Fairmont Copley Plaza, Boston.

Check out the Boston Globe feature announcing this year’s event –“Vanessa Williams to perform at We Are Boston gala in the fall”  http://goo.gl/4N81iY

We are looking forward to celebrating with you on November 17th!